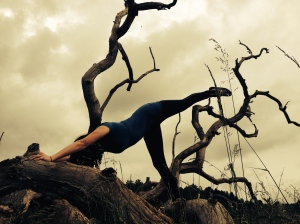 ‘A people without the knowledge of their past history, origin and culture is like a tree without roots.’

The eight limbs of Ashtanga Yoga was a key element to my yoga teacher training. Realising asana (the ‘yoga poses’ part of Yoga which I wrote about here) is only one of eight parts of Yoga was transformational for me. It was for me, filling out the foundation of this wonderful Yoga practice that had been a part of my life for so long. It makes me wonder how many yogi’s are living to the eight parts of Yoga while stating themselves as firm ashtangi’s. I mentioned before the term Yogi was one I was resistant to. I’m aware that it’s Sanskrit for male yoga practioners, but when you here it, it sounds like slang which has been created by someone to separate themselves into a higher group of beings. Its not that I don’t freaking love Yoga, helllooooo? I’ve just always been pretty resistant to slang. I don’t find it tight, sick, clutch or rad to refer to myself as a Yogi. When people ask if I’m a yogi it makes me feel like Yoga isn’t available for everyone. Yogi might not be slang but it sounds like slang and it leads to people referring to themselves as Ashtangi‘s. Don’t even get me started.

I think I got distracted. So, the eight limbs of yoga for those who are interested and for those who do or do not classify themselves in the group ‘Yogi’s’. Let’s talk. Yoga was first systematised by Shiva 7,000 years ago. It was around before that but he was the first person to establish what a yoga practitioner should be. 5,000 years later, a guy named Patanjali reclassified the techniques through the Yoga Sutras, Ashtanga Yoga – The Eight limbs of Yoga. I’m not going to keep going down the line of who then learnt what and reclassified things as Hatha, Ashtanga Vinyasa or Iyengar Yoga. Essentially I think the eight limbs are interesting for any style of Yoga practitioner. Basically it all came from the same place similarly to how we’re all made of the same thing, a topic I wrote about here.

The first and second limbs are moral and ethical principles and there are five constituent parts of each limb. I’m not going to use all the sanskrit because I think its overwhelming and the message should be accessible to anyone. Yama is comprised of non-harming, benevolent truthfulness, non-stealing, realising everything is an expression of supreme consciousness and non-indulgence. Niyama, the second limb, is comprised of cleanliness of thought and body, contentment, sacrifice for the sake of others, study of spirituality and to accept the goal of life as being to reach supreme consciousness.

The third limb is Asana, which is the general yoga class part of yoga. You do all these wonderful poses and flows. The benefits are physical, mental and spiritual. I’ll go more into that another time but its just fascinating that what I knew of Yoga for so long was just one of eight parts.

The fourth limb is Pranayama which in basic terms is breath control. The belief is that by controlling your breath, you control your vital energy. One of the biggest enhancements to my daily Yoga practice has been to do yogic breathing exercises in the morning before I do any postures. It invigorates the body and calms the mind. I really can’t praise it enough.

To emphasise the importance of meditation in the Yoga tradition, the final four limbs of Yoga deal with meditation. They want me to relax more than just in Shavasana?! Yes, they really do! The fifth limb, Pratayahara, is the element of withdrawing your mind from your body. Calming that storm, or chatter which is inherent in everyone’s mind. Yes, we really are all one and the same.

The sixth limb, Dharana, is concentration of the mind on a particular point. Now not only are you withdrawing yourself from external objects, your body and potentially your mind but you are then also concentrating on one thing. For those with a mantra you concentrate on, it helps tame the mind.

The seventh limb is Dhyana, which is meditation in the real sense. Basically if your not withdrawing and concentrating on a particular point you probably won’t have made it up to this point. Its a long process and journey like all things in life but that’s all a part of it. When you reach the seventh limb you are flowing your mind towards supreme consciousness.

The final limb can be experienced by practising the preceding limbs is Samadhi, which is complete absorption with consciousness. Being merged with supreme consciousness, recognising that you are what the world is made up of. When this is experienced, it’s supposed to be utter bliss because you have gotten to a higher level of self-realisation and spiritual realisation. Sounds pretty good I reckon.

I’ve kind of just touched on the surface of the eight limbs. I just want to inspire even one person to think about taking their Yoga practice further and to be curious about the history. Even if you, do one breathing exercise before you practice, you meditate for 1 minute at the end of your yoga practice or you notice that those moral principles are the way you live your life already, its all relevant and interesting. You don’t have to label yourself in the group Yogi, but if you do practice Yoga, being informed about the history and components, gives you new meaning to your practice.